Problem is I don’t love my partner anymore!

You are here: Home1 / Blog2 / Relationships3 / Problem is I don’t love my partner anymore!

The problem is I don’t love my partner anymore

The problem is you’ve decided not to love your partner, not that you can’t

Love is not something we fall into or out of. Love is not something that just happens and we stop feeling it. Love is a state we feel that encourages us to do something kind for another person. It can’t come to us, overtake us or dictate to us, we take a decision and choose to feel it. Loving and liking are not the same. I like my husband 70% of the time; there’s about 30% I don’t like because I wouldn’t behave like that. It’s not important and totally ok!

However, I actively do my best to love him as much as humanly possible whether I like parts of him or not. Not because I’m some kind of saint, far from it, or that, from my perspective, I think “he deserves it”. I do it because the state I am in decides the state of my reality. 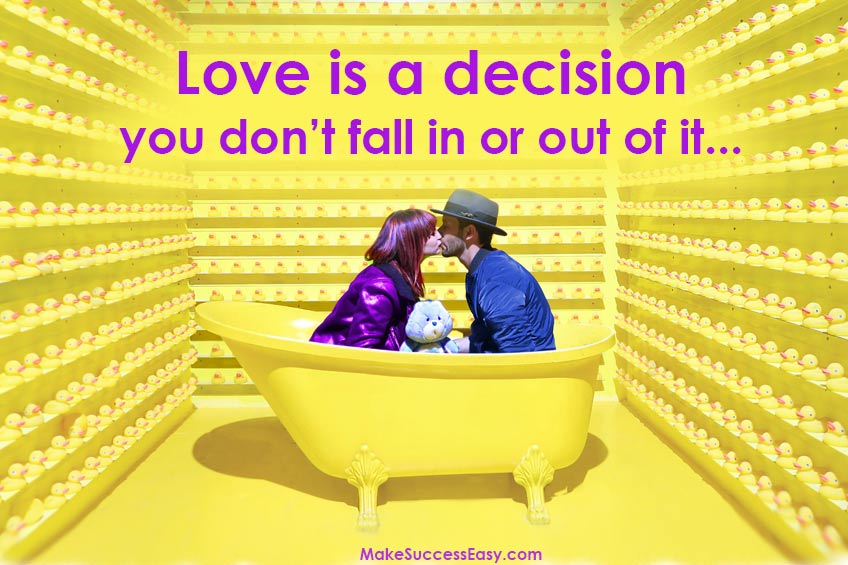 Love is how
you treat children

It’s unlikely that you’ve ever heard an adult say they don’t love their children anymore. Unlikely you’ve ever heard them say that they’re no longer in love with their children or that their child doesn’t love them. In fact just considering it just feels weird doesn’t it? Parents have no expectation from children and there is no score board. They just keep giving with little reward. Sure, there’s those totally magical euphoric, ecstatic moments that can’t be described but for every one of those magic moments there’s about a thousand that aren’t.

Why this
self-less love?

It’s not self-less, that’s why. Parents enter into the real act of love because they perceive the child as an extension of them. They believe the child is theirs and therefore there’s no resistance to giving. Every human being, whether conscious, or unconsciously, calculates everything they do based on what’s in it for me? When it comes to a partner, we haven’t been taught to see them as an extension of us too. That perception shift changes everything.

So why is love held back
from partners?

The reason why a relationship stops being loving is because they they believe their happiness is in the hands of the other person. Partners get into a game of “you’re supposed to do this or be this for me”. Love is not in that game and therefore love can’t be felt. How you treat another person IS what’s in it for me. What goes through their mind is, “Why should I do anything nice for you when I am hurting?”… but each person is hurting because they feel the other person is in control of how they feel. Yes, the benefit of a partnership is that you have another person batting for you and they have the potential to go as far as you dream of for you, however it’s still your job to sell help to them!

What sparks the decision
not to love

When two people are first attracted to each other, they usually start out loving; i.e. focusing on anything that will make the other person feel good. They feel a euphoria when they think about this person. That euphoria naturally attracts them to want to give without cost; there’s no expectation and no score board! They hold wonderful feelings in their heart regardless of what the other person has given. It’s not based on any story about “taking care of my kids, giving me sex, getting a good job, etc. etc.”; any of the stories that people end up telling themselves is the problem for their ultimate break up.

In fact, in the beginning, a person feels euphoria and love towards a person WITHOUT ever having kissed that person or having received any gesture of “effort” to do any of the things that get cited as the cause of a divorce! We just “feel excited”!

So why does a person
decide not to love anymore?

In short, because of either payback or because they feel the other person doesn’t deserve it. Partners start scripting what the other person is supposed to be doing and being to make them happy. Love gets put on hold because they can’t feel the euphoria of what they felt in the beginning.  That initial euphoria continues to be available but it exists in the place where the relationship was, i.e. looking at you with loving eyes. None of us know why this initial attraction happens or why we’re attracted to that person but the excitement is an indication that it’s worth pursuing. What we don’t know at this point is how that’s going to play out; where’s it taking us, what’s the plan? As we don’t know the plan, we start trying to make up stories of how and when and force a story that was never the plan. The clues are there straight away, i.e. it doesn’t get a good reaction! Not only does the other person react badly but the act of nagging or pushing them away doesn’t feel good either.

In the beginning of a relationship, you’re always thinking about the effect of what you do and say on the other person; how good will they feel? Once the game of “you’re supposed to fix my life in some way” gets underway, love doesn’t get a look in. It’s always knocking on the door (hence the bad feeling telling you this is not the way), but we keep banging away thinking we know how it should go. Eventually the exhaustion and numbness we feel in the body is the body telling us “there is no energy in what you are doing”. It is not an indication that “I, or they” cannot love, it’s an indication from the body that you have stopped “relating” in a loving vibration.

Partners stop treating their partner like they would a child. They don’t think about what they’re saying in terms of how it will improve the other person’s life. Ultimately you want a child to get dressed quicker to ensure the smooth running of your day but YOU STOP to think about HOW you’re going to say it. You instinctively think about what’s in it for them so you know how to present it to “get what you want”. That power is always there with adults too but it’s totally underused causing devastating, yet unnecessary, results.

Whenever you’re feeling angry at your partner, do this exercise. Take a moment and imagine somebody giving you 40 million kroner (£4million / $70million). Are you still angry? I’m guessing not. This will help you realise that what the person is doing is not the problem. The amount of money suddenly solved something, so ask yourself what did the idea of the money do that gave you relief? What can you do that you aren’t doing now and why are you blaming your partner for it not happening? If you want their help then think about how you’re selling it to them. Problem is, people usually haven’t sold it to themselves first and that’s what the real pain is all about; it’s the pain of not feeling fulfilled.

Love cannot come to you unless you are holding it in your heart. Hold love for a partner in your heart as you would for a child. Allow them to be, do and have what makes them happy… and watch magic unfold. A partner is a best friend, not a servant; they owe you nothing. Stop feeling afraid you will lose out or withhold love as payback, the vibration of love cannot take from you it can only bring situations that make your heart sing. Your partner is going to mirror back to you any pain in how you treat yourself. Disrespect, invalidation, unhelpfulness… it’s coming from inside you. A relationship is only one way; your relationship with a person is only the experience going on inside you when you “relate” to them.

He has a snoring problem, I can’t sleep!